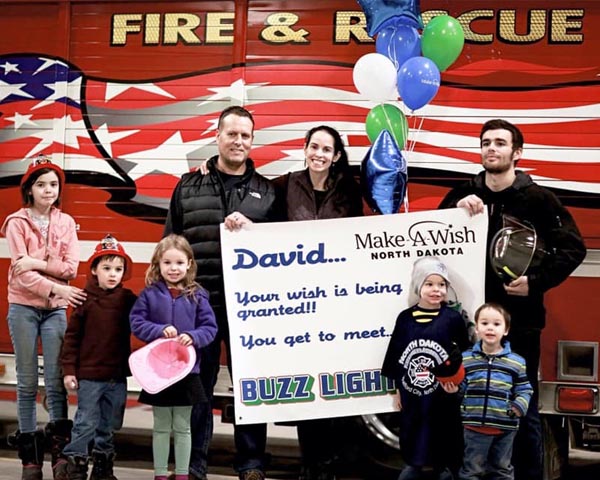 A four-year-old cancer survivor in Watford City, David Alvey, Jr., recently had his wish granted thanks to Make-A-Wish North Dakota.
When Alvey was diagnosed with acute lymphoblastic leukemia in the summer of 2018, the family’s world was changed completely. But one thing that didn’t change was Alvey’s dream of one day meeting Disney’s Buzz Lightyear character.
And on March 6, thanks to Make-A-Wish North Dakota, Alvey had his wish granted during a reveal party at the Watford City Fire Hall hosted by Chris Kubal and Carolyn Levang, McKenzie County wish granters with Make-A-Wish North Dakota.
“When we started watching the Toy Story franchise, he really took a liking to Buzz Lightyear,” says his mother, Paris.
With as many as five children, Paris and her husband didn’t foresee any trips in the nearby future.
“At this stage in our life, for that to happen was really unlikely,” Paris says.
Which made the surprise from Make-A-Wish North Dakota extra special for the Alvey family.