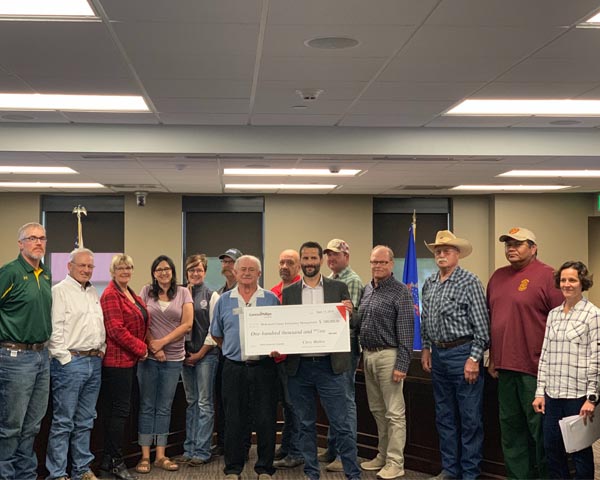 As North Dakota State Radio begins the process of updating its radio system, several McKenzie County volunteer fire departments and emergency response departments will get a leg up on the process thanks to a $100,000 donation by ConocoPhillips.
During the McKenzie County Commission meeting on Tuesday, Sept. 17, representatives of ConocoPhillips presented a $100,000 check to the McKenzie County Emergency Management office that will be used to purchase 24 of the new radios.
“I’m very grateful to ConocoPhillips for this donation,” states Karolin Jappe, county emergency manager. “It is a good start getting ready for when State Radio makes the switch.”
According to Jappe, the cost of the 24 mobile radios will be $112,000 with 14 going to the fire departments serving the county, four to the McKenzie County Ambulance Service and one to each of the four quick response teams.
“It is critical that all of our emergency response departments have the radios that will allow them to maintain contact with State Radio,” states Jappe.
In making the donation, ConocoPhillips noted that it is important to have an updated statewide communications system which will improve response capabilities for first responders throughout the largest county in the Williston Basin.