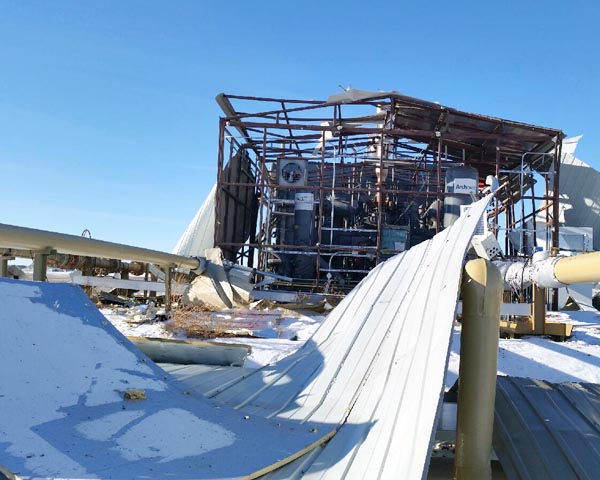 County has little regulatory control over pipeline facilities
Jim Talbert, McKenzie County Building and Planning director, says the real issue is if the county is requiring enough safeguards in their ordinances to protect workers and residents. He says safety is the very first thing that should cross everyone’s mind and is what should be the first priority on everyone’s list.
“I was very keenly interested in going out to the compression station explosion site to see exactly what had happened,” said Talbert. “It was classified as a ‘lesser incident.’ They say ‘incident’ like I cut my finger, but someone could have potentially been injured or killed. Those situations are not ‘little incidents.’ They are serious situations.”
Talbert says that when he visited the site of the explosion on Monday, Dec. 28, with other county and Oasis personnel, there were two compressor buildings, maybe 10 to 15 feet apart, and one of those buildings had the sides and roof completely blown off.
“The Oasis personnel said that there wasn’t gas running through the building at the time of the explosion,” stated Talbert. “They said they were warming up the engine compressor. But something just didn’t make sense to me because of the size of the explosion and how much force and pressure was behind it.”
According to Talbert, he says that one of his biggest concerns with pipelines is that the county, or local government, doesn’t have any regulatory power over certain pipeline facilities that come to the county.
Under the North Dakota Century Code, pipelines are categorized under two types, according to Talbert. The first type is Gathering Lines, which local government has no authority or jurisdiction over, and are regulated by the North Dakota Industrial Commission. The second type is Transmission lines, which local government does have some authority over.
“If they are transmission lines, we have the ability as a county government, to require a CUP,” states Talbert. “If it’s on the gathering side, we don’t. It concerns me that the county doesn’t have a say in the location of these kinds of facilities. The state has their requirements, but I’d like when something like this happens, to have the pipeline company come before the county commissioners to give a report of what happened, what they’re doing to rectify it, etc. That way we know what’s going on as well.”
According to Ritter, the North Dakota Industrial Commission (NDIC) does not cite locations of gathering pipelines. However, well locations cannot be closer than 500 feet from an occupied dwelling unless waived by the surface owner.
Talbert says it’s a ‘black eye’ to the pipeline companies whenever a situation like this happens. However, he does think the pipeline companies strive to run a very safe operation.
“It hurts them whenever something like this happens,” stated Talbert. “I appreciate that Oasis came in to talk to us, even though they may not have been required to. They realize this is a big concern for the residents and we want to protect everyone.”
But, when the pipelines fall under county jurisdiction, the county commissioners can include special requirements that the company must meet in order to be granted a CUP.
“Just recently, we had the companies hire a fire specialist engineer to help create a full comprehensive safety plan so that when they come to us, everything is covered and we know every detail of the system being placed in our county,” stated Talbert. “It’s the pipeline companies that we have no jurisdiction over that is concerning.”

State and federal government regulate majority of pipelines
According to Justin Kringstad, North Dakota Pipeline Authority director, there are several different entities on various governmental levels that regulate the pipelines in North Dakota.
“For clarification on who regulates pipelines in North Dakota, it is dependent on the location, commodity, purpose, and size of the system,” stated Kringstad. “A system may be regulated in North Dakota, by either the Department of Mineral Resources or the Public Service Commission, or at the federal level by the Federal Energy Regulatory Commission and/or the Pipeline and Hazardous Material Safety Administration.”
And according to Kringstad, the North Dakota Pipeline Authority is not a regulatory agency for the industry, but rather “was created for the purpose of diversifying and expanding the North Dakota economy by facilitating the development of pipeline facilities to support the production, transportation, and utilization of North Dakota energy-related commodities.”
Karolin Jappe, McKenzie County Emergency Services manager, along with other county officials, says that if McKenzie County wants anything to change, the county needs to be represented at the North Dakota Industrial Commission meetings. Diligence and consistent presence, according to Jappe, will be key in being heard and addressing future pipeline issues or concerns.
According to the North Dakota Pipeline Association, there are approximately 7,000 miles of pipelines that crisscross North Dakota transporting natural gas, crude and other energy products every day to homes, businesses, and to other parts of the country.
And according to Ritter, McKenzie County has nearly 2,900 miles of gathering pipelines. And to keep an eye on McKenzie County’s pipelines and related facilities, Rittter says there are a number of NDIC personnel directly working for McKenzie County.
“The NDIC has 11 inspectors in McKenzie County,” stated Ritter. “Nine of those are dedicated to well site and facility inspections, and two of those are dedicated to pipeline inspection. In addition, we have two supervisors that spend time in McKenzie County and we are also looking for two additional pipeline inspectors to be based out of Williston. So when fully-staffed, we will have 15 inspectors for the county.”